In the midst of the political upheaval of the early 1990s, an Estonian girl and a Russian boy reach across cultural lines to unite over a shared bottle of American soda.

Madli Lääne, originally from Estonia, has directed several documentaries and short films. Her short ABC premiered at Berlinale film festival 2012 and screened at over 25 international film festivals, including the competition program at Palm Springs International ShortFest. Her first feature length documentary THE COLOURS OF ISLANDS won main awards at the film festivals in Canada (EstDocs) and Poland (Tranzit). Madli is currently a last year MFA Film Production student at the University of Texas at Austin. Her first film at UT Austin WALK IT OFF won the Grand Prize at Texas Union Film Festival 2014. Her next film THE CONSEQUENCES OF SPOONING won the 2nd Prize at the same festival next year and aired on ESPN’s Longhorn Network. 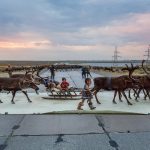